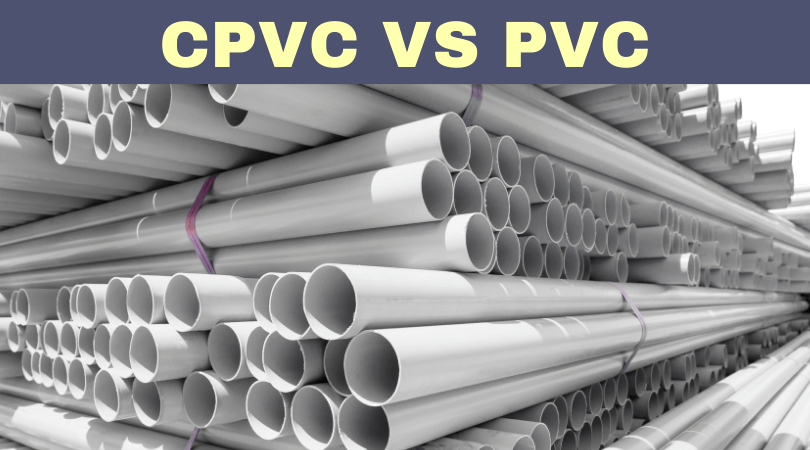 Hello people, Today I’m going to share a very interesting post on PVC vs CPVC. It is a timeless debate among pipe professionals, but today things will be made clear.

CPVC VS PVC | Difference Between PVC and CPVC –

The most significant difference between PVC and CPVC is the range of temperatures each is capable of resisting. CPVC can withstand temperatures up to 200° Fahrenheit (39°C), while PVC peaks at 140° Fahrenheit (60°C). Above those temperatures, both CPVC and PVC will start showing effects and soften, increasing the risk of pipes and joints failing and, after that, failing the plumbing system.

CPVC (Chlorinated Polyvinyl Chloride) is in the same thermoplastics family as PVC (Polyvinyl Chloride) and shows superior heat and pressure resistance, which is why it is the preferred material for high-end industrial applications among the two.

Because of the various chemical compositions, the bonding agents, primers, and solvent cement are different for CPVC and PVC. For instance, CPVC solvent cement must cater to ASTM F493 specifications, and PVC must cater to ASTM D2564 specifications. Because of this, CPVC and PVC pipes and fittings, along with their solvents and bonding agents, should not be used reciprocally.

Apart from meeting ASTM standards, different solvent cement is needed depending on the pipe’s size and applications. To do that perfectly, always check the product containers to ensure you’re the ideal agent for an ideal application.

Molecular Composition of CPVC and PVC – 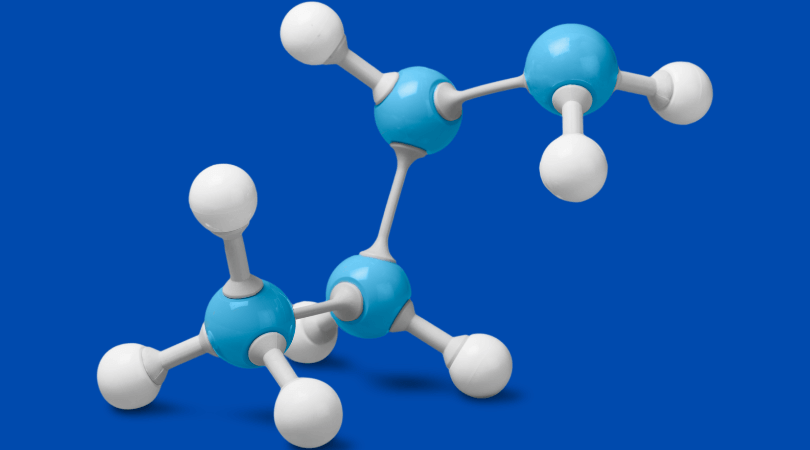 CPVC is a PVC that goes through a chlorination reaction. Generally, PVC and chlorine react with each other utilizing a free radical mechanism which can be commenced using thermal and UV energy.

CPVC is different from PVC as approximately 40% of its backbone structure is filled with chlorine atoms. On the contrary, PVC contains only 25 chlorine in its backbone, filling the remaining sites with hydrogen. The chlorine atoms surrounding the carbon backbone of CPVC are large and bulky enough to cushion its carbon chain from the environment, which often weakens other thermoplastics.

Thermoplastics’ exceptional chemical properties make them increasingly popular amongst traditional metal enthusiasts. CPVC and PVC are inert to most acids, salts, bases, and aliphatic hydrocarbons. That ability extends their service life by years and sometimes even decades. Chemical resistance, without a doubt, is a distinct advantage for both PVC and CPVC.

However, subtle differences are made between CPVC and PVC because of the former’s chlorine content; each has a niche advantage. One great example is the great concentration of sulphuric acids. In a general scenario, CPVC is superior to PVC.

Paradoxically, CPVC’s high chlorine makes it vulnerable to ammonia and other amines, whereas PVC excels because of its non-existent chlorine content. However, before choosing CPVC or PVC for your desired application, consulting the material supplier and referring to a chemical compatibility chart will be wise.

As the chlorine content in CPVC increases, it also gives rise to its Glass Transition Temperature (Tg). The Tg is when a polymer transforms from hard, glassy material to a soft, rubbery substance losing its structural solidarity.

As said earlier, CPVC’s higher chemical resistance is shown in the ASTM standards for each material, as the max. Service temp. for PVC is up to 140°F (60°C) and for CPVC it is up to 200°F (93.3°C). Take note that one should always consult your material supplier about material individual operational capabilities before making any major procuring decision.

While PVC can still be utilized for applications at 130°F (54.4°C); however, the material can resist significantly less pressure at higher temperatures (above 73°F or 22.8°C) than CPVC.

Industrial PVC is engineered to be less prone to flammability and smoke production; specific ASTM tests are designed to determine a material’s fire resistance capabilities.

Flash Ignition Temperature: The lowest temperature at which a tiny outward flame can ignite sufficient combustible gas. For CPVC, for this to happen, the temperature is about 900°F (482°C), and rigid PCVC should be somewhere around 750°F (399°C).

Limiting Oxygen Index (LOI): The percentage of oxygen needed in the near atmosphere to maintain a flame. For example, CPVC’s LOI is 60, and PVC’s is 45.

Both PVC and CPVC resin are generally found in powder or pellet form with the additives already mixed in. The resin is then molded into products used for residential, industrial, and commercial purposes.

The two flagship manufacturing techniques for PVC and CPVC are Injection Molding and Extrusion.

Injection Molding: This technique is advisable for large volume production. A ram or screw-type plunger is used to force molten plastic into a mold cavity. Then the resin is again fed into a heated barrel through a mold tool and cooled to harden.

Extrusion: This technique can also be utilized for bulk production. Extrusion starts when the resin is forced through the top of the machine. The raw material will gradually melt by the force of the spinning screw and heater along with the barrels. It is then formed into a continuous profile and hardened.

According to a 2016 study conducted by Zion Market Research that pipes and fittings contribute about 62% of global PVC revenue. Easy installation, corrosion, and weather resistance are a few features that make PVC stand out from alternative materials. CPVC is the ideal choice for pipes and fittings where heat, chemical, and pressure resistance is the main requirement.

The outstanding corrosion resistance and fire performance of CPVC is huge leverage for industrial applications and is often overwrapped with Fiber Reinforced Plastic (FRP). However, when sheets and liners require less pressure and temperature demands, then PVC should be used.

With air pollution on the rise and governments worldwide looking for measures to curb it, the need for reliable fume handling systems, especially in corrosive environments, is witnessing healthy growth. Depending on the applications and temperature, both PVC and CPVC can be utilized. 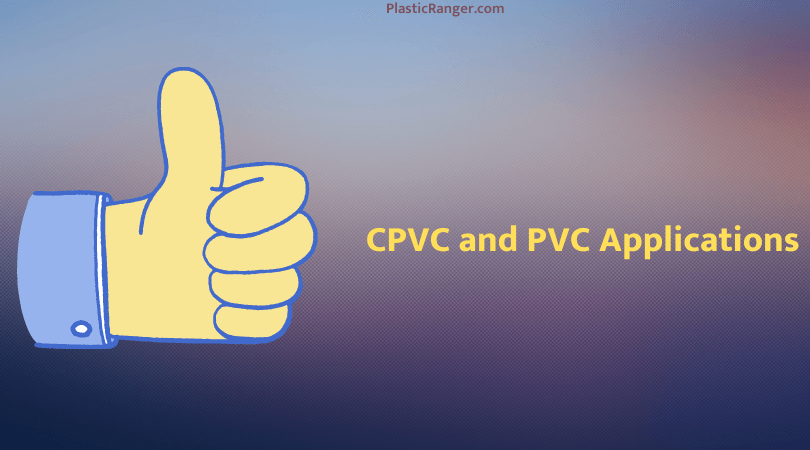 Both PVC and CPVC, thanks to their salient properties like versatility, ease of installation, and low-cost corrosion resistance.

PVC’s most significant advantages are its low cost and easy installation. It can be installed without any hassle, without using any skilled welders. According to an estimate globally, more than 50% of PVC manufactured is utilized in the construction sector.

Housing: PVC sheets can be fabricated to replace other materials like wood as a lightweight and robust alternative. The material is often painted or furbished to imitate other materials.

Signage: As PVC is inexpensive, durable, and easy to paint, its sheets are commonly used for signage.

Electrical cable insulation: With the blending of certain plasticizers, PVC can become softer and more flexible for use as cable insulation. In addition, it’s also fire resistant and inexpensive.

Since CPVC has all the strengths and benefits and PVC, it can be utilized for many applications. However, it is a bit more expensive, which can pose a challenge in replacing it with PVC.

However, in situations where there is a need for chemical resistance and to endure more pressure and heat, CPVC is the ideal option.

Industrial Applications: CPVC is a reliable, long-lasting solution for the most rugged industrial environments and is often referred to for the more demanding industries.

For plumbing applications that require more pressure and temperature compatibility, CPVC provides a sufficient and flexible mechanism resisting pitting, scaling, and bacteria build-up – it doesn’t matter whatever the chlorine and Ph levels are.

Which One To Choose?

The answer to what you should choose completely depends on your application. I have shared the difference between CPVC and PVC.

It would be best if you went with CPVC for its superior resistance and performance. Most suitable for chemical handling, hot water distribution, and commercial applications.

And, it would help if you went for PVC because it is budget-friendly. Most suitable for cold water distribution, recreational applications, residential construction, and DIY projects. 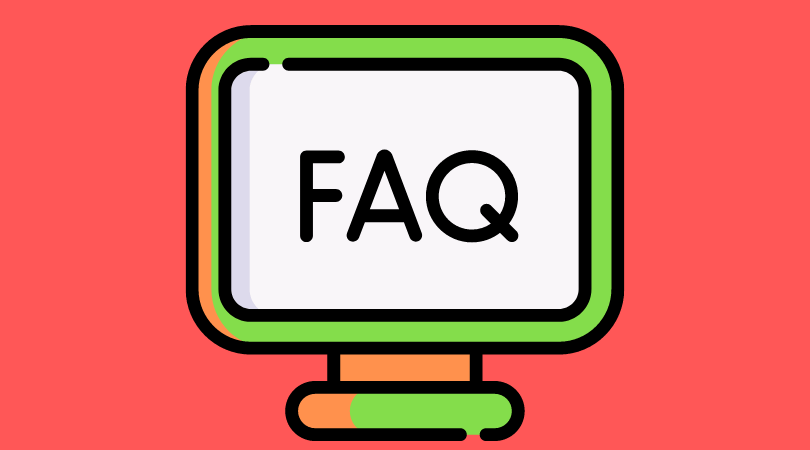 1. Can PVC and VPVC be glued together?

2. Which PVC pipe is suitable for outdoor use?

Ans. Regarding manufacturers’ recommendations, gray-colored Schedule 80 PVC pipe is a good option for outdoor use as it is a heavy-duty material that can withstand outdoor surroundings.

Ans. UV light radiation can cause the outer part of the PVC and PVC pipes to degrade moderately but not significantly. Over time, pipes exposed to sunlight will have a visible color change called “UV Discoloration.

Long-term exposure to sunlight can decrease the CPVC and PVC’s impact strength and resistance; however, it doesn’t seem to significantly impact the pipes’ pressure, malleability, and rigidity. Interestingly, furniture-grade PVC pipes are impact and UV-resistant. They will not change color in sunlight.

4. What is the life expectancy of PVC and CPVC Pipes?

Ans. Both PVC and CPV pipes have a life expectancy of 75 to 100 years.

5. How Does CPVC reliability compare to other materials?

Ans. The chlorination of CPVC gives it a clear advantage over other materials in dealing with common water treatment chemicals. The chlorine molecules in the CPVC pipe block the chlorine and chloramine from attacking the pipe, making it immune to chlorine destruction and extending its lifespan.

Copper enthusiasts should know that copper plumbing is susceptible to chlorine-related issues. Neither copper nor any other material has such an effective chlorine barrier. Permeation and leaching are other problems that can contaminate water running through the pipe.

That is all I want to say about CPVC VS PVC. Both of them have their pros and cons but are overall extremely useful in several applications. Before making any major decisions related to procuring that material, consult your material supplier and understand your requirements, upon which you can make a final decision.

Have a lovely day.